skip to main | skip to sidebar

The Hufford family loves a good adventure.  That's how we found ourselves aboard the DREAMCHASER and on our way to Hesketh Island which is located in Kachemak Bay, near Homer, Alaska.  As we left the Homer Small Boat Harbor a huge flock of gulls took to the air.  It seemed as though the sky was filled with birds as we passed under them. 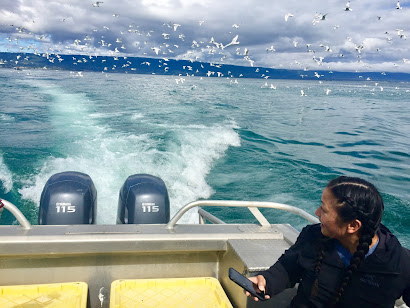 Laura aboard the DREAMCHASER passing under a flock of gulls as we depart the Homer Small Boat Harbor.
Captain Zach was at the helm and told us to be on the lookout for orcas which had been seen regularly in the area for the past few weeks.  Right on cue as we motored through Eldred Passage the whales appeared.  Zach slowed the boat and let us get a very good look at them as they surfaced in regular intervals.  It was an excellent start to an excellent trip. 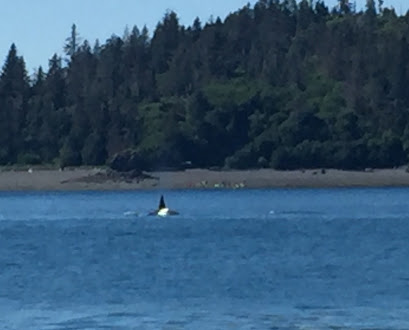 An orca surfaces as we make our way to Hesketh Island.

As we arrived at the island Zach gave us some useful advice about how things work.   He told us about the catchment water system, the sauna, and some the activities we might pursue while we were there. Zach and his wife Becky own and operate Porter's Alaskan Adventures and they are awesome.  We have known them for many years and they are solid folks who know how to make their dreams come true and live them.

We moved our gear into the cabin and immediately went back outside to enjoy the beautiful weather.  We took a short walk down the beach to the sauna and checked things out.  We met Zach and Becky there and had a good chat about our families and Hesketh Island.  Back at the cabin we all sat on the porch and soaked up the sun and view of Tutka Bay, which was directly across from our cabin.  I could have sat on that porch for a solid two days.

But, we had some exploring to do. 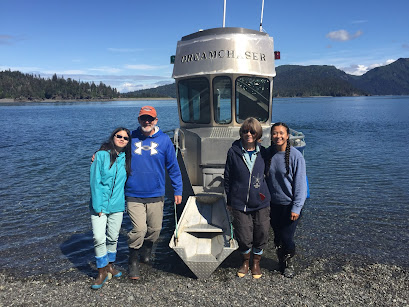 The DREAMCHASER and Hufford family at Hesketh Island. 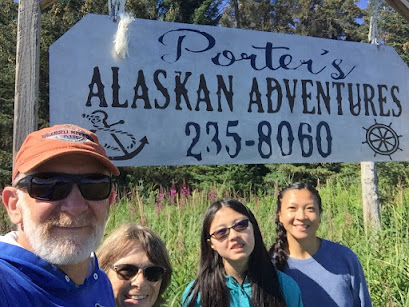 The cabins were built about 20 years ago and they remain as solid as can be.  Ours had sleeping arrangements for six and a galley with every utensil and cooking implement you could ever need.  The view out the front window is spectacular and can be enjoyed while eating meals or during rambunctious cribbage tournaments. 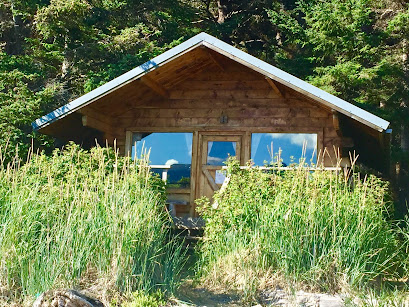 The cabin at Hesketh Island. 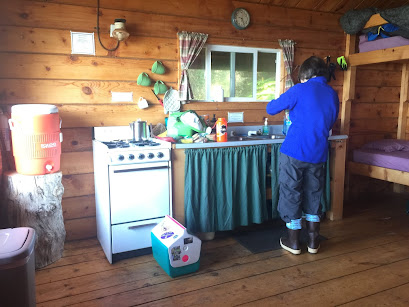 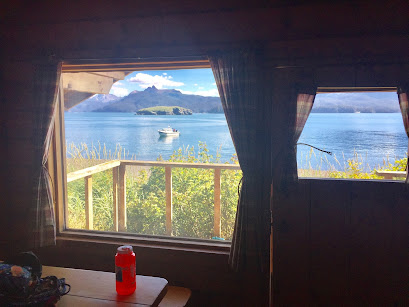 The view through the cabin windows.

In order to explore the nearby water we rented a double kayak from True North.  They delivered it to the island where it was waiting for us upon our arrival.  We were eager to launch just before high tide and paddle toward Elephant Rock.  We hoped to be able to kayak under the elephant's trunk and our timing was perfect!  Laura and I kayaked back and forth under the trunk trying to get good photos of our efforts.

The next day Mrs. Huffy and I went for a ride, but she was unable to hold a paddle due to the thumb surgery she had earlier in the summer.  So, I paddled us to Elephant Rock and back from the stern position while she enjoyed the ride.

We also took several additional kayak trips during our stay at the island to check out Grass Island and Kayak Beach.  There is no shortage of destinations for a paddler! 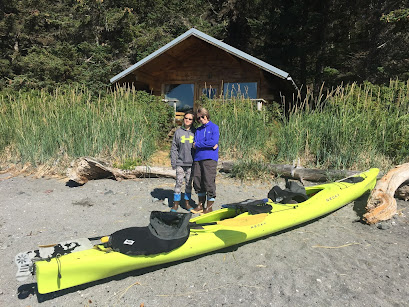 Emily and Mrs. Huffy in front of the cabin beside our double kayak. 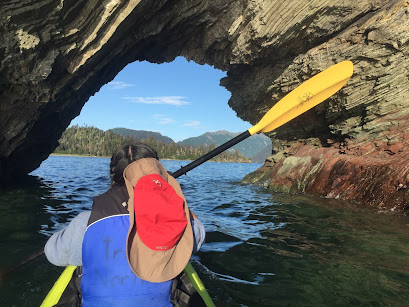 Passing under the elephant's trunk at Elephant Rock. 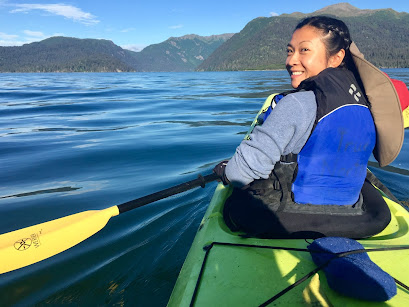 Laura sea kayaking near our cabin on Hesketh Island. 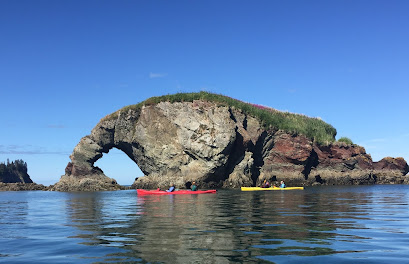 A group of kayakers near Elephant Rock.  The tide was too low to kayak under the trunk at this time. 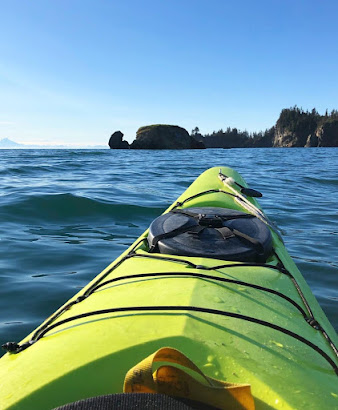 Our sea kayak cruising the waters near Hesketh Island.

As mentioned, we played a major cribbage tournament during our stay at the island.  Some of the games were louder than others as we worked our way through an extensive winners and losers bracket system.  All the results were kept on a chart and Emily was the ultimate champion.  She seems to win lots of cribbage tournaments.

We also spent some time using the binoculars to watch the wildlife and boat activity in front of the cabin.  Seals and sea otters passed by and we watched as several fishermen hauled in halibut while their boats were anchored not far offshore.  In the evenings, Laura and Elizabeth enjoyed the sauna and jumping into the ocean afterward.  We also found time to walk along the beach and look at the tide pools when the tide was low. 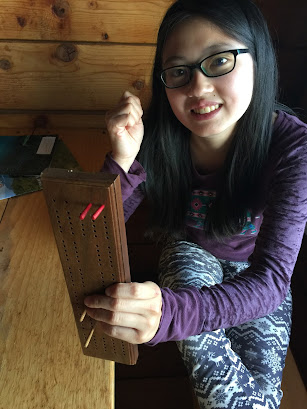 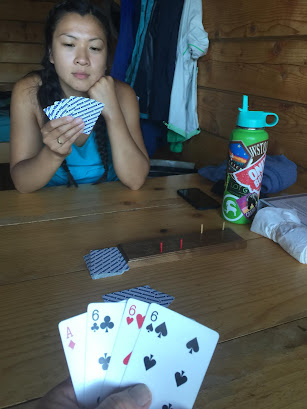 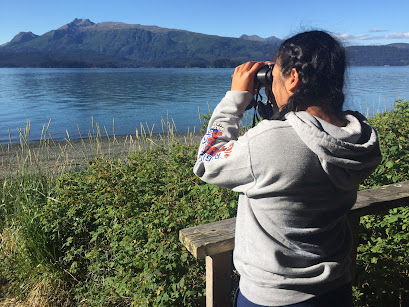 Using binoculars to watch the wildlife. 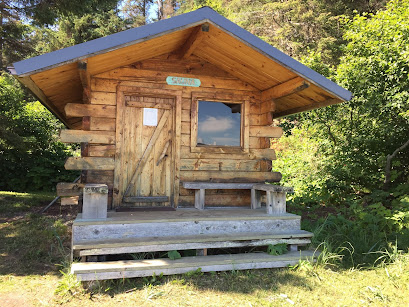 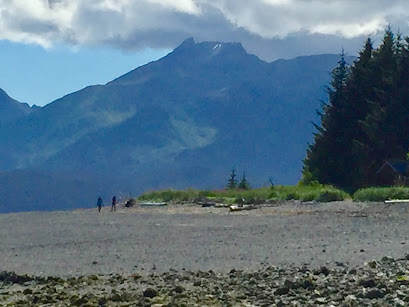 Sisters walking together along the Hesketh Island beach.
Two nights and three days passed quickly and the time to leave came too soon.  We slowly packed our gear and hauled it to the water's edge where Zach would pick us up and give us a ride back to Homer.  The adventure was nearly over, but we had a wonderful time on Hesketh Island, and I have a feeling we will be
returning in the very near future!
Below: A sea otter watched us as we kayaked around Grass Island.
(photo courtesy Laura Hufford) 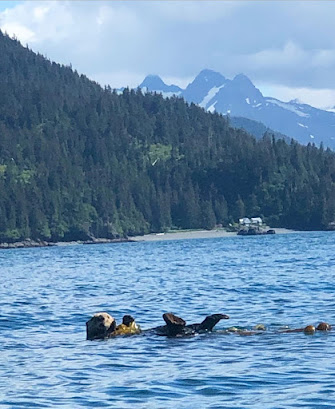 Wally
You get away from roads, and magic just naturally starts to happen. --Steven Rinella